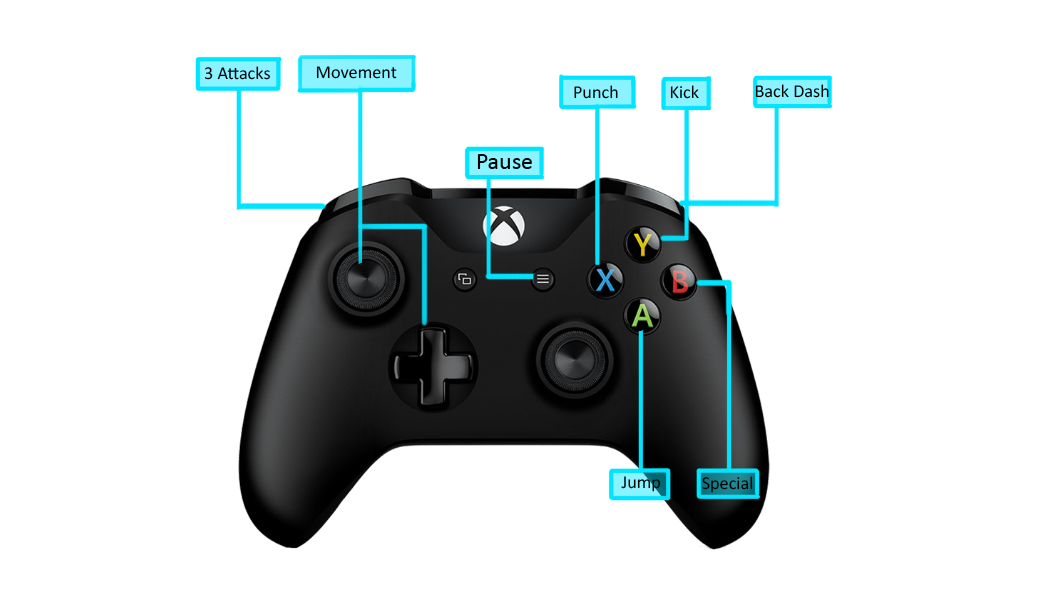 Use your movement keys to move up, down, left and right on the playing field. Press the Jump key to launch yourself into the air. Holding down a direction during the start of a jump will determine your trajectory.

Some characters have unique movement options, like Lynx who can dash and run. Check out the move list below for more details.

Any attack can be cancelled into any other attack as long as the previous attack connected with an opponent. This gives you the opportunity to be as creative as you want with your combos. If an attack misses however, you’ll have to wait for it to finish before being able to attack again.

EX is generated whenever you land an attack, or are hit by one. Once you’ve filled your EX Gauge, you will be given 1 EX Stock.

EX Attacks require 1 EX Stock to execute, and are dramatically enhanced versions of regular attacks. The also ignore Hitstun Deterioration and will not cause Blowouts. To execute an EX Attack, keep holding down the attack button used to input an attack in order to get it’s EX Variant.

Super Attacks usually require 2 EX Stocks to execute. These attacks are invincible when they start, and do massive amounts of damage. Like EX Attacks they also ignore Hitstun Deterioration, and additionally can be cancelled into themselves.

By pressing all three attack buttons, and spending 1 EX Stock, you can cancel any attack at any point, regardless of whether it hit or not. Time will slow down briefly and you will regain all air actions (enabling multiple aerial double jumps). This can be used defensively to recover from missed attacks, or offensively to extend combos and get into position.

How stylishly you are performing is ranked from C, B, A, S to X. The more stylish you are, the more rewards you receive. Bonus Style is awarded for mixing up combos and constantly switching up the attacks you use.

While under attack and being hit, press all three attack buttons and spend 2 EX Stock to execute a Burst. Bursting will immediately make you invincible, as well as releasing a devastating attack on your enemies.

When flying through the air or lying on the ground after being hit, you can hold down any attack button to recover from your hit state. Doing so will grant you a brief window of invincibility. You can also hold down a direction to recover in that direction. Recovery will only trigger once all hitstun has worn off.

Performing a dodge makes your character invincible during the startup of the move, however you will still be vulnerable towards the end of the dodge. You can cancel any attack into a Dodge, as long as the attack has hit an enemy.

Dodge an attack at the last possible moment will trigger a Perfect Dodge. A Perfect Dodge will case time to slow down, you will gain more invincibility, and be able to cancel out of your dodge with any attack.

Doing a Perfect Dodge while also in the middle of performing a combo will trigger a Perfect EX Dodge, which will fill your EX Gauge, together with all the advantages of a Perfect Dodge.

Attacks all have different properties, such as causing a ground bounce or a wall bounce. These properties can change when using the EX version of an attack, so try out all the attacks to find your favorite.

As the length of a combo increases, the amount of hitstun a move causes decreases. This means that at some point your next move will not be able to come out fast enough to continue the combo, and the enemy will be able to recover.

*OTG or On The Ground attacks hit opponents even when they are knocked down on the ground.

*All commands are written assuming the character is facing right. Mirror directions when facing left.

Didn't find what you were looking for?

Ask us directly using any of these methods: