Lynx, a member of the Bullet Elf clan, is a warrior who values strength over all else. She can be extremely reckless, rushing head-first into situations without considering the consequences.

After she discovered a god’s arm in a temple near her remote village, she became obsessed with the idea of transcendent power, and sees the realm’s tournament as a path to her own godhood.

Rictor is an extremely agile fighter whose clan has stood as a rival to Lynx’s for generations. He has great respect for her prowess as a fighter, but fears her raw ambition could lead to the destruction of their realm.

He has long followed her, keeping a watchful eye, ready to intervene should he deem it necessary, and has entered the tournament to maintain his tireless vigil. 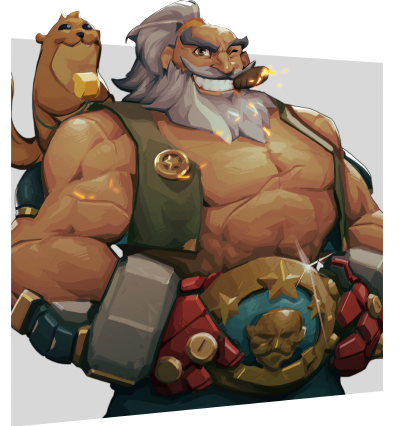 In a world where the strong rise to power, few have more power and influence than Mark Taggart. His legendary fighting abilities have lead to him becoming mayor of the city, where his rule is unchallenged, but just.

However, his desire for power remains unsated and, like Lynx, he sees the tournament as a means to an end: unchallenged power throughout the world.